The year before I left Milwaukee, I worked occasional catering jobs for a woman in Shorewood who made things like cocoa-dusted chocolate truffles and buckeyes, and served Eighties-sophisticated dinner menus of roast Cornish game hen nestled alongside wild rice stuffing, and cream puffs piped into the form of swans atop pools of strawberry coulis. I loved those jobs because, in additional to being paid for plating and serving, I’d always go home with a few extra twenties from the host folded into my purse, which was the kind of tip money I normally made on a busy Saturday slinging plates at the Woolworth’s Coffee Shop. And all while wearing street clothes, rather than a royal blue polyester smock and a “my name is WENDY” pin.

Because my own cooking repertoire had not advanced that far beyond pans of lasagne and spaghetti with meatballs, I considered wild rice the essence of class and fanciness and began serving it at my own dinner parties in Minnesota. A few months into law school, I borrowed a car from a friend for a shopping trip to Byerly’s market in the suburbs just south of Minneapolis, where the wild rice soup – creamy, spiked with sherry and studded with diced ham and carrots – struck me as even more elegant than wild rice stuffing, if that was possible. It quickly became part of my “for company” repertoire, much like virtually anything wrapped in puff pastry or simmered in cooking wine, and as such was similarly doomed to fall from favor once I actually learned to cook. Incidentally, if any of my old law school friends are reading this, I’m sorry I served you the same chicken breasts in white wine sauce with wild rice mushroom pilaf at practically every dinner party, and even more sorry about the omnipresent snow pea and red bell pepper sauté. I don’t even like red bell peppers.

I hadn’t eaten wild rice in perhaps fifteen years, but after a Minnesota friend visited a couple of summers ago, with a gift of maple syrup and wild rice, I decided to give the soup another shot. I gave my Byerly’s cookbook away over twenty years ago, but it wasn’t hard to recall the components and figure out the technique. Like most cream-style soups of midwestern origin, it’s built on a roux base with chicken stock, and finished with actual cream. Sometimes you find mirepoix throughout, but more often just carrots. Most versions include a generous handful of diced ham, and toasted almonds for texture. It’s the soup that eats like a meal, and once it starts to cool, the starch in the roux base gelatinizes, turning the soup into something closer to wallpaper paste.

So I took it in a different direction. I remembered reading once that, during his tenure at Porter and Frye in Minneapolis, Steven Brown updated wild rice soup to feature a delicate vegetable bisque in lieu of the roux-thickened soup, poured about a heap of sautéed brunoise and puffed wild rice. I’ve never eaten it, but I’ve long admired Chef Brown and his role in modernizing Midwestern cuisine, particularly at Levain. This is my homage.

“True” rice and wild rice represent different genera, but both are cereal grains from tall, water-dwelling grasses. Wild rice, common to the thousands of lakes dotting northern and central Minnesota, is sheathed in a nearly-black husk, far tougher than that of true rice, and never polished off. It is nuttier and more fragrant than true rice, and the husk provides an interesting texture. Most people boil the hell out of wild rice until the innards spill out and curl like the scrolls of an Ionic column. Once that has happened, the rice is overcooked and waterlogged. Stop cooking and drain the rice once the husk splits lengthwise and the interior is tender, not soggy.

As with most starchy grains (think popcorn or puffed wheat cereal), wild rice can be puffed. For puffing to take place, a small quantity of residual water within a dry husk must come to a boil, generating steam that causes the husk to rupture. In addition, the starch must be gelatinized. This is why you can’t just toss a handful of dry raw rice into a pot of boiling oil; rather than puffing, it will simply fry to a pile of rock-hard nibs. To puff any grain successfully, you must first gelatinize the starch by cooking, and then dry the cooked grain until the outside is completely dry and only a small quantity (perhaps 5-8%) remains within. Drop the dried grains in hot oil and watch them bloom to the surface after a second or two. Note: you can accomplish this with true rice, rye, farro, wheat berries, and lots of other things. The process is a lot like making tapioca-based chips or chicharrón.

For the smoked pork belly:

Between one and four days in advance, prepare the smoked pork belly described in this post, through the smoking step. You will need about 8 oz, plus an additional four for the brunoise below.

You can substitute whole slab smoked bacon, which is after all what you are making.

Just before service, slice the bacon 1/4″ thick and pan-fry until crisp on the outside and warmed through on the inside.

Juice the vegetables separately in a masticating juicer. Discard the fiber or reserve for a future use (note the celery fiber tends to be very stringy and may not be suited for later use unless dehydrated and crumbled).

Bring the bay leaf, the juices, and the consommé to a simmer for about 10 minutes; add the cream and simmer another 5. Do not allow the soup to boil or it will turn an unappetizing olive color as the chlorophyll degrades; your soup should rather be the shade of Crayola “spring green.” Soften the gelatin leaves in hot water and whisk in. Season with the vinegar (more or less than 1 tsp, to taste) and the celery salt. Set aside. You may reheat the soup by bringing back to a simmer for 5 minutes. Do not boil or the cream will break. This recipe makes far more soup than you need for four people; you can freeze the rest.

Note: if you don’t have a juicer, you can simmer the vegetables (starting with the celeriac, then adding the leek, then at last the celery) in the consommé with the bay until tender; remove the bay and then blend in a vitaprep until completely smooth. Strain through a chinois lined with muslin and then strain again. Omit the gelatin. Add the cream, vinegar, and salt as specified.

Place a sauté pan over medium heat and, when hot, add the diced smoked pork. Fry until crisp but not hard. Drain and set aside. Add the carrots to the fat and sauté until just becoming tender; add the celery and continue to cook until both are tender. Combine with the lardons and herbs; season to taste.

Bring the salted water to a boil and add the wild rice. Cook until the grains are not yet split but tender enough to bite to the interior. The grain at the interior should not be hard or chalky but the husk should remain intact. Drain well.

Spread in a single layer on Silpat or parchment on a half sheet pan. Place in a 160F oven for about 45 minutes until the rice is dry to the touch and, when bitten, seems firm and dry but not rock-hard. 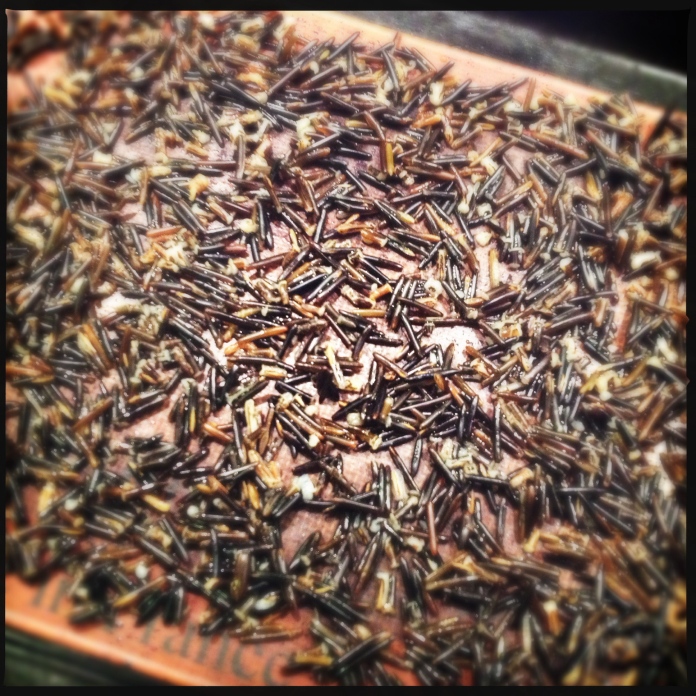 Heat the oil in a deep pan allowing at least 4″ headspace (preferably 6″ or more). Once the oil reaches 370F, drop the rice in small batches (not more than 2 tbsp at a time). It will fall to the bottom of the pan and rise immediately, the oil boiling furiously. Skim immediately and drain on paper towels. 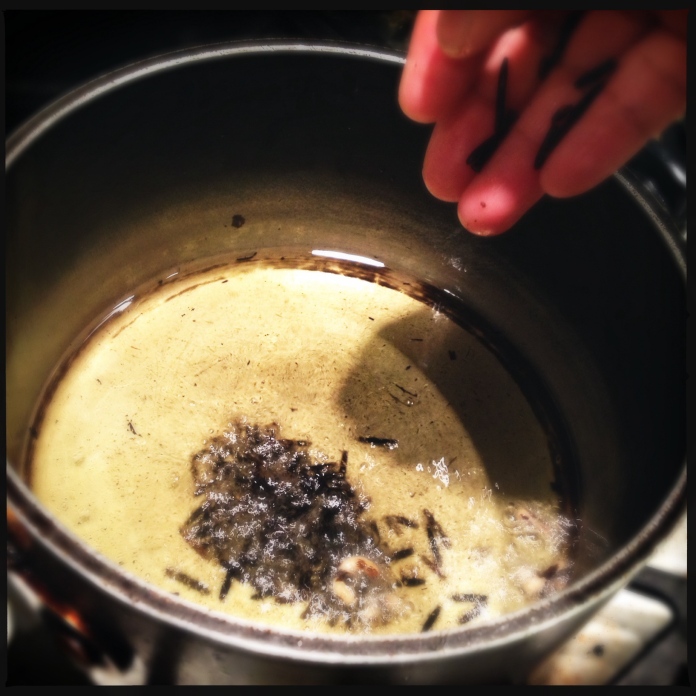 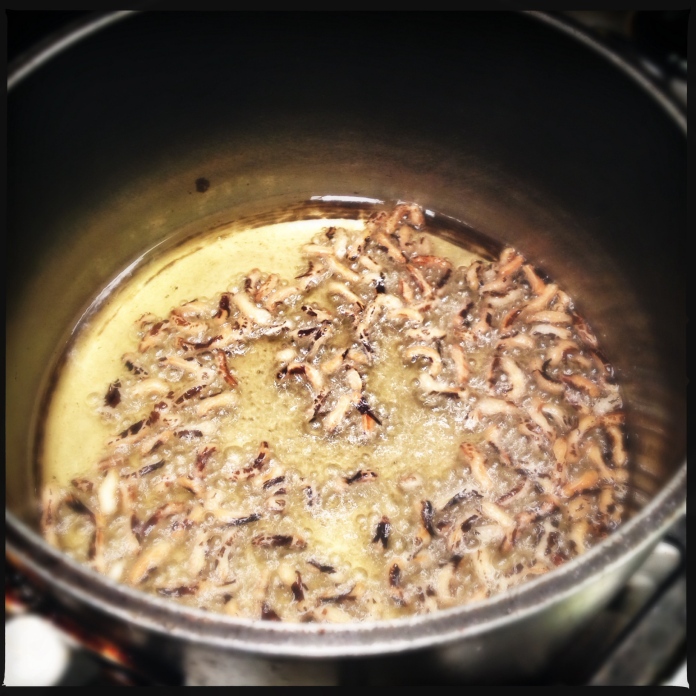 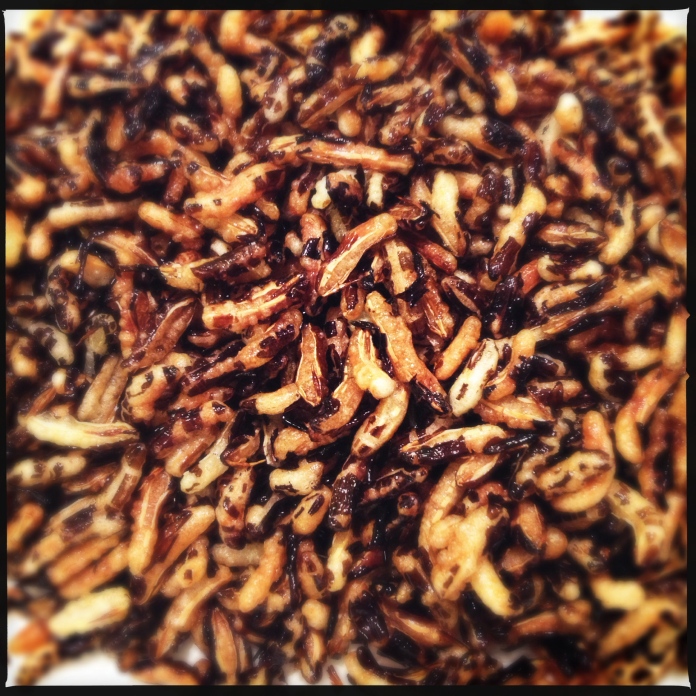 To assemble the soup, place 2 portions of crisp pork belly in a shallow bowl with about 1/4 c vegetables and 1/4 c puffed wild rice. Garnish with celery leaves and parsley. Pour the bisque around and serve immediately. 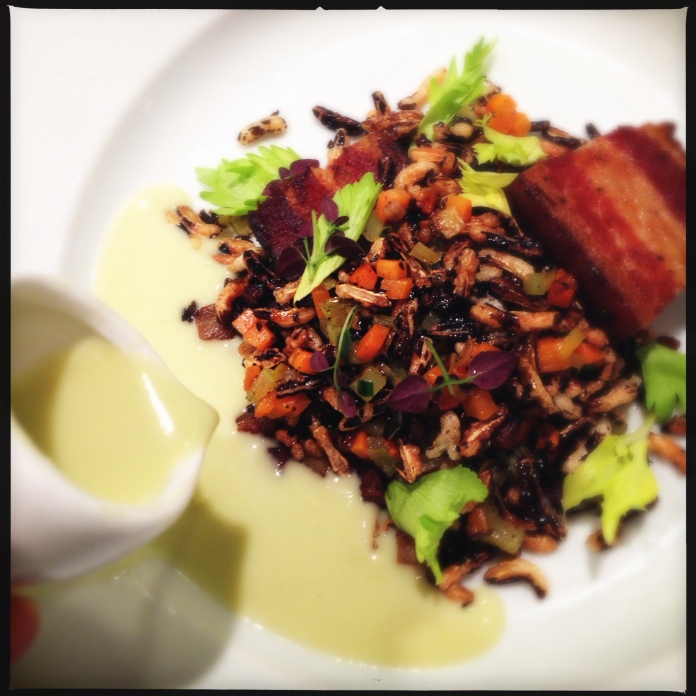 Note: This post was brought to you by the Creative Cooking Crew: