Thanksgiving dinner is the one meal you’re not supposed to screw with. You know the drill. There’s the roast turkey and gravy, the mashed potatoes, the stuffing or dressing, an orange vegetable, a green vegetable, and a cranberry sauce. You finish up with apple, pumpkin, or maybe mincemeat pie. The boundaries of acceptable creative exercise are pretty well-circumscribed: you can use cornbread or white bread for your stuffing, and you can throw in sausage, oysters, or dried fruit if you like; you can glaze your turkey with maple syrup, rub it in southwestern spices, or bard it with bacon; you can put marshmallows on your sweet potatoes or spin your squash into soup with apples and curry. As much creativity as enterprising cooks can deploy, though, the meal ultimately always registers the same familiar notes.

This doctrinaire approach to the national meal loosens up considerably if your ancestors didn’t grow up eating turkey for a couple of weeks between late November and early December each year. My husband’s second-generation Italian relatives up in New Jersey, for example, do serve the turkey and stuffing and cranberry sauce, along with an orange vegetable known as “fluffy carrots,” which taste more like whipped carrot halvah than anything else, but they also begin the meal with giardiniera and a big platter of sliced salami, capicola, and mozzarella. Back in the day, when the Italian-born immigrant generation and their kids surrounded the table, the meal started with antipasti, moved on to meatball and escarole soup, then pasta, and then the turkey, which was shoehorned into the meal like the obligatory cheerleader in a teen movie. My husband’s father, an Englishman until the day he died, mastered the quintessential American meal despite never relinquishing his British passport, and served his turkey surrounded with bangers and the abomination known as bread sauce. Other friends of immigrant parentage tell similar stories – roast turkey surrounded by kimchi and other banchan and eaten in lettuce with gochujang; arroz con pavo; yoghurt-marinated turkey with dal and pilau rice. Other families just made their favorite festival foods like tamales, fried noodles, or biryani, and threw in the turkey as a cursory nod to the holiday.

Recently, my husband and I spent a couple of weeks in Shanghai and Taipei, where we ate a lot of steamed dumplings. My husband’s favorite place to eat in Taipei is Din Tai Fung, made famous worldwide in 1993 by a New York Times article about the top ten restaurants in the world. The pièce de résistance at Din Tai Fung, and the source of their enduring fame, is the xiaolongbao, or small steamed soup dumplings. If you haven’t had them – and in the US, outside of NYC and maybe a place here or there in San Francisco, Seattle, or LA, you probably haven’t – their xiaolongbao are a form of tang bao, or soup dumplings, that originated just east of Shanghai in Nanjing. They’re not dumplings in soup; they’re dumplings with the soup inside. The unitiated typically bite right into the dumpling straightaway and burn themselves on the gush of soup (which ends up on shirt sleeves and fronts), but the way you’re supposed to eat them is to lift one out of the bamboo steamer, place it in a soup spoon, tear a small hole in the side using a chopstick, and slurp the soup out of the spoon before eating the dumpling with a little fresh ginger julienne in black vinegar. Alternatively – and considered bush league, but a better way to get the soup out in my opinion – you can bite the top knot off the dumpling and suck out the soup. Good xiaolongbao require a thin wrapper strong enough to support the weight of the soup and filling; when you lift it out of the steamer, the dumpling should droop like a sack instead of retaining its shape.

So let’s say, instead of just plopping a turkey in the midst of an otherwise unrelated festival meal, one were to combine the two? Maybe as xiaolongbao filled with turkey as a first course?

Most people think the mystery of xiaolongbao lies in the soup. Where does it come from? How does it get inside the dumpling? Actually, though, the soup mystery is easy to solve. You make a strong stock using lots of collagen from pork skin or hocks; when cold, the stock sets to a firm gel from the dissolved gelatin and is easy to fold into a dumpling skin. The far greater challenge when making xiaolongbao is to achieve the proper texture for the dumpling skin. For a skin strong enough to hold the soup and filling, but thin enough to be delicate, you must use a hot water dough (actually a boiling water dough). The boiling water gelatinzes the starch in the flour.

Don’t be tempted to substitute turkey breast for the thighs. You need the fat in the thighs to stand up to the high heat of steaming and keep the filling moist; ground breast will steam to hockey pucks. More expensive, and wasted in this dish. The other components of the meat filling must be minced so finely as to be indistinct from the meat; jutting chunks of celery or garlic will tear the wrapper.

For about 5 dozen xiaolongbao

For the smoked turkey gel:

Place all the ingredients other than salt in a stockpot and bring to about 180F (not quite simmering).

Cover and maintain temp. Cook for 8-12 hours, taking care the liquid never breaks a simmer. Strain and chill. Scrape off any fat before use. The stock should be a fairly firm gel. Refrigerate until using. This recipe makes more soup gel than you need; freeze what you don’t use. 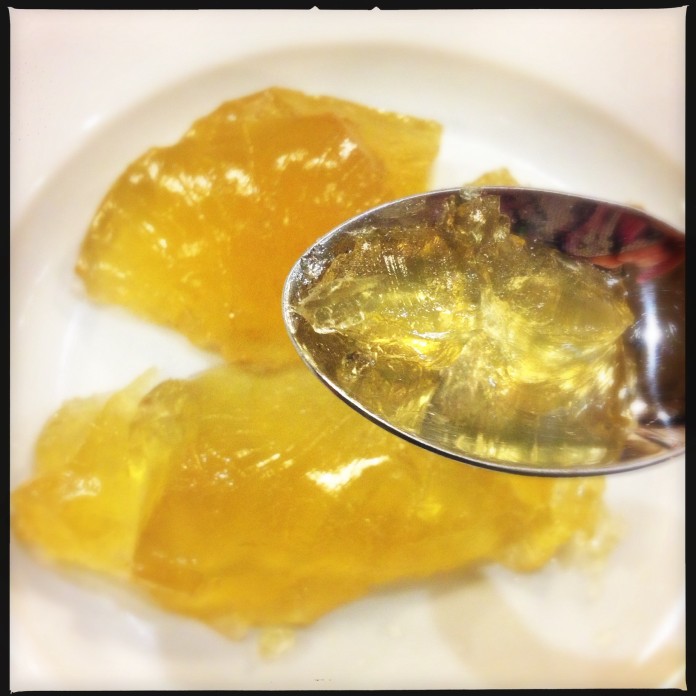 Grind together all the solid ingredients through a medium die with the cornstarch, and then again through a small die. Combine with the spices, salts, and soy sauce. Do not overwork and leave somewhat loose in the container.

Cold smoke over applewood for about 2 hours at 40F or using a smoking gun. Chill, covered tightly, until using.

For the compressed apple pickle:

Julienne (1/16″) the apple and combine the liquids, salt, and sugar until dissolved. Place in a bag in a chamber sealer for 90 seconds.

Combine the flours in a stand mixer and add the boiling water. Mix thoroughly (the mixture will be ragged). While mixing, add the cold water (slowly at first to avoid overhydrating). You may not use all the cold water. Knead for about 10 minutes. If the dough is really sticky and wet, add a little more AP flour about 5g at a time, but don’t worry if it’s soft and just a little sticky. Cover and rest for at least 1 hour but up to overnight (under refrigeration).

When ready to use, flour a wooden board and cut off 5g portions of dough (about a medium-sized marble). Flour both sides of the dough and roll it out using a small wooden pin, to a diameter of about 3 5/8″/9 cm. Ideally, the round will be slightly thinner at the edge than at the center. 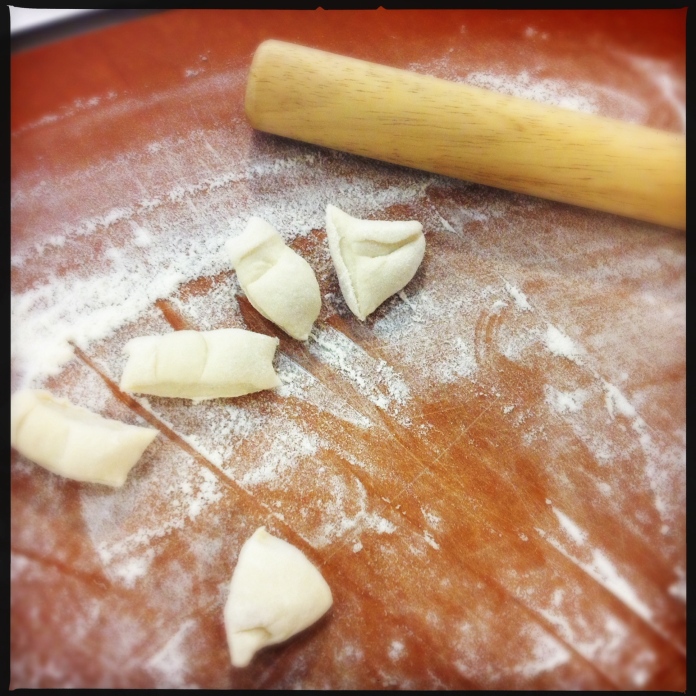 Fill each round with about 2 tsp of meat mince and a chunk (heaped 1/2 tsp) of gel. Pleat all the way around, ideally 14-18 pleats, and twist to seal at the top. Set in a bamboo steamer lined with parchment about 1″ apart. 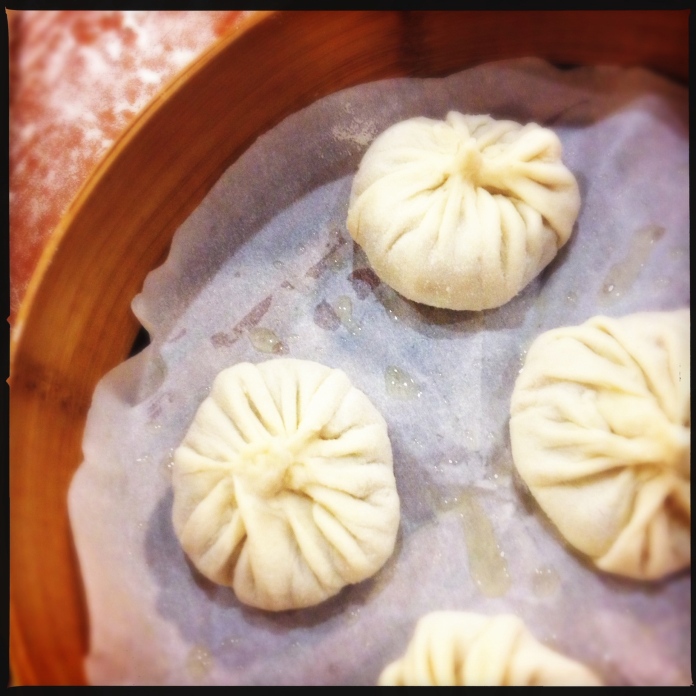 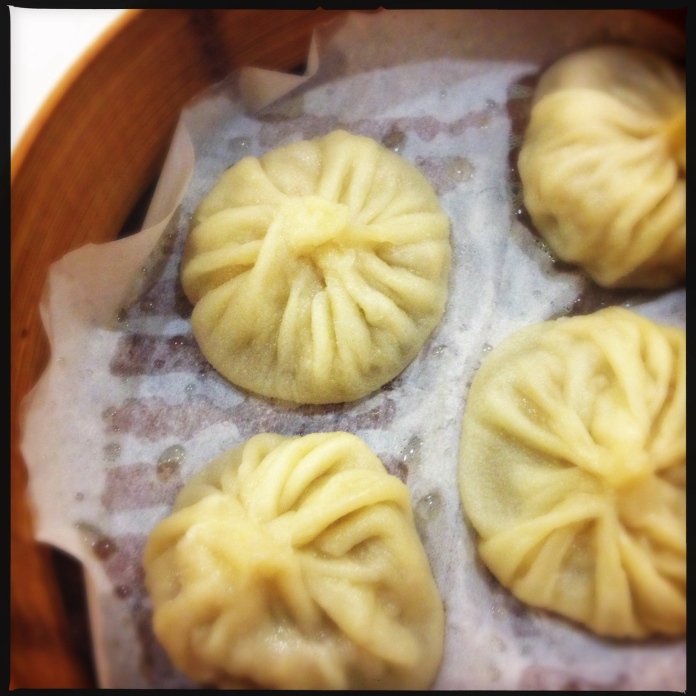 Set the steamer over boiling water and steam until just cooked through in the center, about 3-4 minutes. Serve with the compressed apple and the vinegar dip.

A final word: These cook up darker and more yellowish than those from Din Tai Fung. I have two guesses at the reasons: they might use bleached flour, whereas I always use unbleached; and the dough or the steam are possibly slightly alkaline. To hedge your bets against alkalinity, you can add a tablespoon of distilled white vinegar to the steaming water, but don’t be surprised if it doesn’t help. I’m pretty sure this is all about the flour because this recipe does not include any alkalinizing components like baking soda or baking powder. If the slight yellowness distresses you, try a bleached flour.

Note: This post was brought to you by the Creative Cooking Crew: