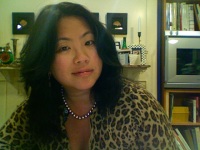 Q: Recommendations for cooking rockfish, please? Also, I have two giant fillets that came from a 23 1/2 inch fish. What is portion size for a fish like that? Should I think of it more like salmon (a smaller portion goes a long way, because of its richness and density), or more like a whitefish (flaky and light and so a good sized fillet isn’t more than one person can eat reasonably)? Help me Obi-Wendy Kenobie, you’re my only hope!

A: Thanks for your question. Rockfish, also known as striped bass on the east coast, is a firm, mild white fish with small, moist flakes and edible skin. I’m a big fan of rockfish, which is plentiful in its native Atlantic habitat and is not only delicious but a sustainable choice as well.

You asked about portion size. Judging from your description, you probably have about 3 to 5 lb of meat total, if the fillets are 18″ or so (minus head and tail). It’s hard to say, though, since fish yields can vary a great deal. As a light and not particularly fatty fish, rockfish is easy to eat in quantity. My husband and I, for example, can finish the fish from a 12″ rockfish. Assuming you’re serving it with a salad and a vegetable side dish but not a lot of starch, I’d say your two fillets could feed six hungry people at about 8oz each, or maybe eight people of less ambitious appetite.

If you were going to prepare the rockfish whole, on the bone, I’d steer you toward this recipe for steamed rockfish with ginger. It’s a classic Chinese preparation, although it doesn’t showcase the skin by crisping. Since the fish already is off the bone, you can approximate the results of the recipe by preparing it en papillote (in parchment). The fish steams in its individual packets and takes on the flavors of the ginger and scallion.

You also can consider using the rockfish in the stew recipe I just posted the other day, substituting 2″ portions of rockfish for the hake. If your guests don’t eat pork, increase the amount of pimentón and cayenne by 25% and skip the chorizo-cooking step, frying the vegetables in oil instead.

If you’re feeling more ambitious, I highly recommend cooking the fish skin-side down in oil or butter to crisp the skin, since crispy skin rockfish is a great treat. Portion your fish, and place a large skillet over high heat. Season the fish with salt. When the skillet is hot, add a generous amount of oil or butter (more than enough to just film the pan). Place the fish, skin side down, in the hot pan. Do not crowd. When the skin begins to curl up and is crisp and golden, flip the fish over and reduce the heat. Continue to cook until just opaque throughout.

You will need parchment paper (not wax).

Portion the fillets into 6 to 8 oz squares (perhaps 3″x3″ but weigh the first one to be sure). Combine the soy and Shaoxing wine and brush the mixture on the inside and outside of each fillet on both sides, several times. Cut enough rectangles/squares of parchment to completely wrap each fillet. The paper should be quite large so you can fold it over several times the size of the fish.

Place each soy-seasoned fish portion in the center of the square of packet, skin side down. Top each with equal portions of the scallion and ginger slices. Wrap by bringing the top and bottom edges of the paper together above the fish, and then folding, like a brown paper lunch bag, several times, creasing well, until your creases touch the fish. Then roll the sides in the same way, creasing as you go. (There’s a fancier technique for classic en papillote preparations, but you don’t need to use it).

Meanwhile, combine the minced scallions, ginger, salt, and soy in a small bowl; combine with the sesame oil. Set aside.

Place the fish packets on a half sheet pan. Bake in the heated oven until well puffed, about 8 mins/inch thickness of fish. The fish should be cooked through.

Serve the packets directly on plates and slice each packet with a sharp knife to release the steam. Serve the scallion-ginger mix with the fish, spooning it over.

One thought on “Fish tales.”